I will attempt to take this step by step since it’s a complicated process if you’re a first timer on more advanced things in linux. Taking it step by step means that there will be many steps but most of them will be very short and thoroughly explained. I will be making some assumptions since they are basically the foundation of having a good experience when doing this:

some introductory words:
Wouldn’t it be amazing if you could use one tower computer as two or more desktops? Of course it would be. There are many technologies in the enterprise such as SRIOV but what about the desktop? What can you do then? The internet (or at least some small corners of it) have been taken by storm since the release of linux kernel version 4.1 and later. Terms like VFIO, QEMU, IOMMU, GPU passthrough, PCI device separation and many more have been associated with the subject. You can read all of that on your own time though which is what I advise you do. I will put some links to resources such as the arch wiki page about this which is the starting point fro many people who are interested in this sort of thing. So in simple terms, what is this all about? The idea is this: you take a graphics card plugged in your computer and let it be used by a virtual machine. The host operating system can’t use it, in my case linux but the guest operating system can, in my case windows. Instead of waxing philosophical I decided to go for this configuration to showcase a common practical application of all of these technologies.

On to the actual steps now.

Your cpu should support VT-d if Intel or AMD-Vi if AMD. Your motherboard should have good IOMMU grouping (there is a workaround if it doesn’t, see the arch wiki page I will link in the end for more information). You have a monitor with multiple inputs or two monitors or a KVM switch. You have two sets of mouse and keyboard.

You need to edit /etc/default/grub by adding the option intel_iommu=on or amd_iommu=on, depending on your cpu vendor, within the quotes of GRUB_CMDLINE_LINUX_DEFAULT. After that, update grub using the command grub-mkconfig -o /boot/grub/grub.cfg and then reboot.

First, run dmesg|grep -e DMAR -e IOMMU and you should see something like:

If you see something like that, you’re on a good path. To further ensure that your IOMMU groups are good, run the script below (you have to make a new file with nano, paste the script and then make it executable with chmod +x):

To quote the arch wiki:

“Not all PCI-E slots are the same. Most motherboards have PCIe slots provided by both the CPU and the PCH. Depending on your CPU, it is possible that your processor-based PCIe slot does not support isolation properly, in which case the PCI slot itself will be appear to be grouped with the device that is connected to it.”
“This is fine so long as only your guest GPU is included in here, such as above. Depending on what is plugged in your other PCIe slots and whether they are allocated to your CPU or your PCH, you may find yourself with additional devices within the same group, which would force you to pass those as well. If you are ok with passing everything that is in there to your VM, you are free to continue. Otherwise, you will either need to try and plug your GPU in your other PCIe slots (if you have any) and see if those provide isolation from the rest or to install the ACS override patch, which comes with its own drawbacks.”

In my case I had a PCI bridge in the same IOMMU group as my video card and the audio device associated with it so it was fine.

You need to run lspci -nn and find the VID:PID that corresponds with your gpu and your gpu’s audio device if it has one. Mine are these: 10de:1004 10de:0e1a (gpu and gpu audio device respecitively). Afterwards just take those two IDs and put them in /etc/modprobe.d/vfio.conf like this: options vfio-pci ids=10de:1004,10de:0e1a (make sure to replace my IDs with yours).

In /etc/mkinitcpio.conf check that you have (in this order) MODULES=”vfio vfio_iommu_type1 vfio_pci vfio_virqfd” and HOOKS=”modconf”. Following that, you just have to run mkinitcpio -p linux in order to regenerate the initramfs and then reboot. WARNING: you will not be able to get output from your gpu after the machine has rebooted since the gpu will be claimed by vfio and not by the driver it was previously using, you will only get output from it when it’s been assigned to the VM.

Run dmesg | grep -i vfio to see if your gpu and it’s audio device are being claimed by vfio. Sometimes it doesn’t show up correctly there so in order to double-check just run lspci -nnk -d 10de:1004 and lspci -nnk -d 10de:0e1a (replacing my IDs with yours as usual).

To install the things necessary for this, use pacman -S qemu libvirt ovmf virt-manager firewalld.

The configuration of /etc/libvirt/qemu.conf can prove to be a little intimidating. What you need to do:

I made a directory, /pub, and did a nifty chmod 777 /pub so it was surely accessible because having the iso in my home directory gave some errors.

We are going to be using VirtIO drivers for some things because performance is better so we need to get those drivers. Simply head to Index of /groups/virt/virtio-win/direct-downloads/archive-virtio and get the latest ones.

(I will edit and add the gui setup and stuff later)
you’re still with me? great. things are going to get easier and more gui-oriented 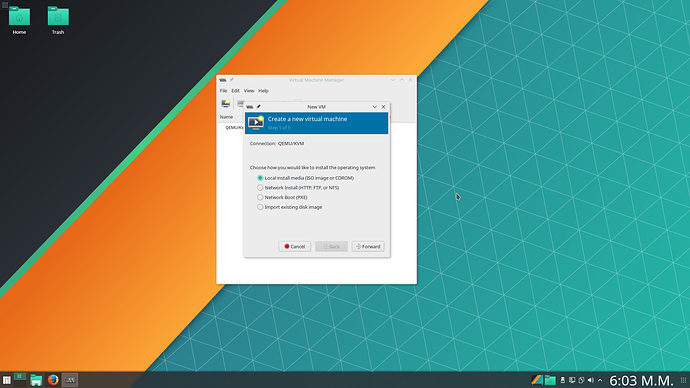 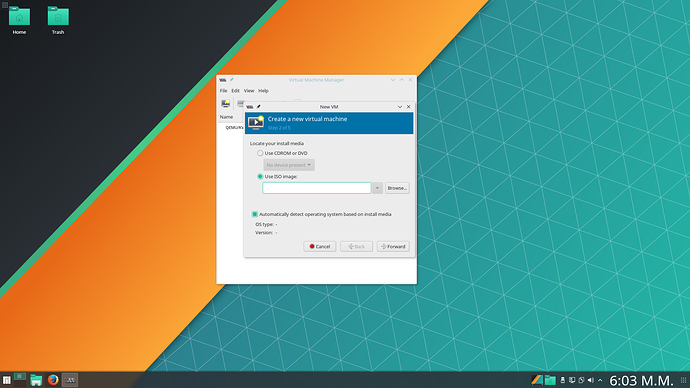 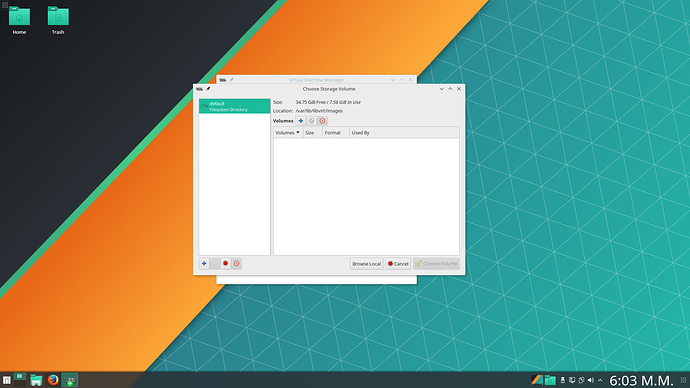 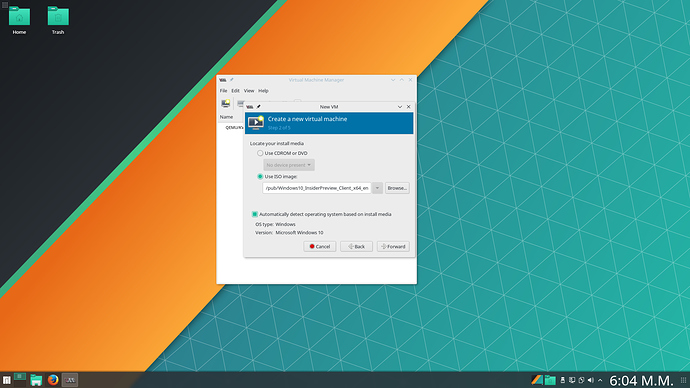 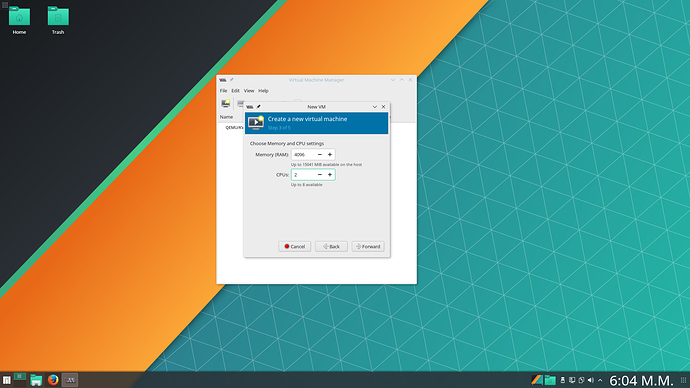 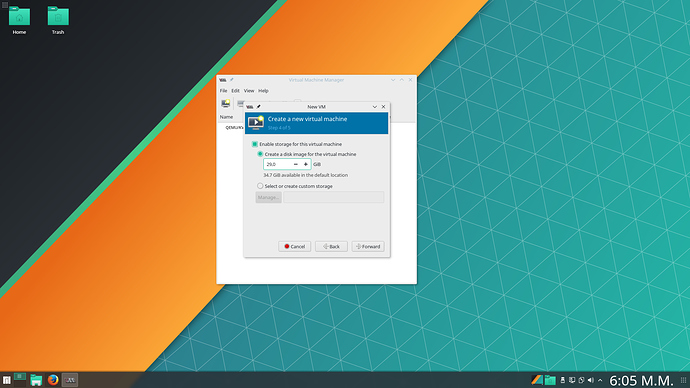 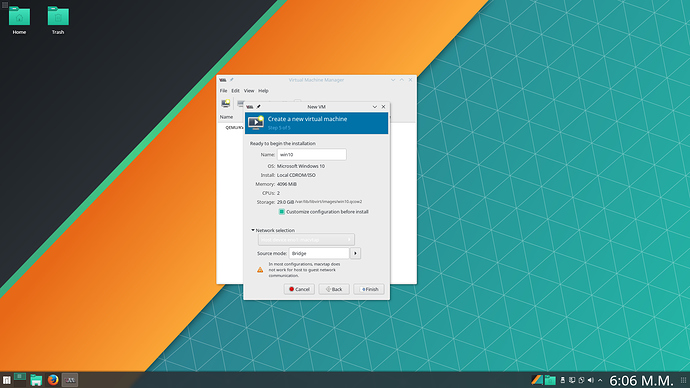 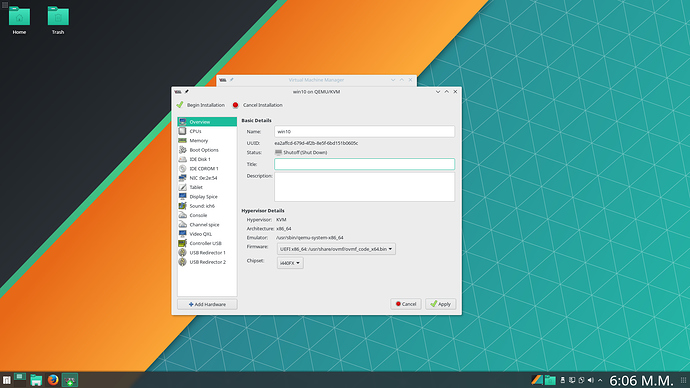 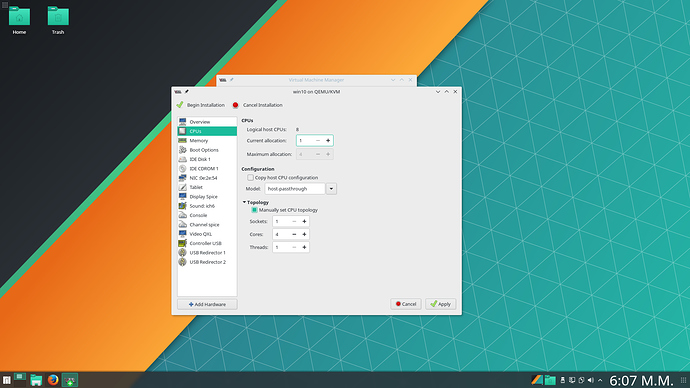 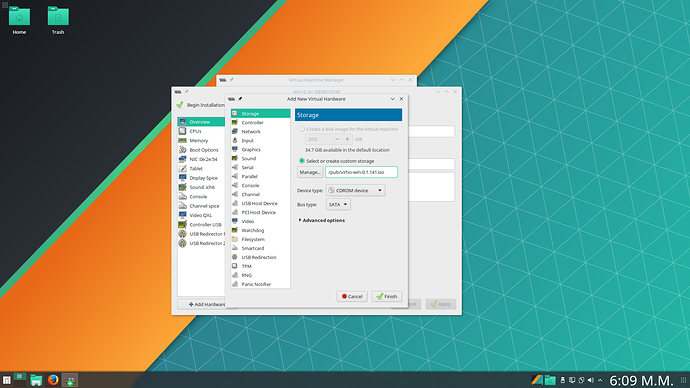 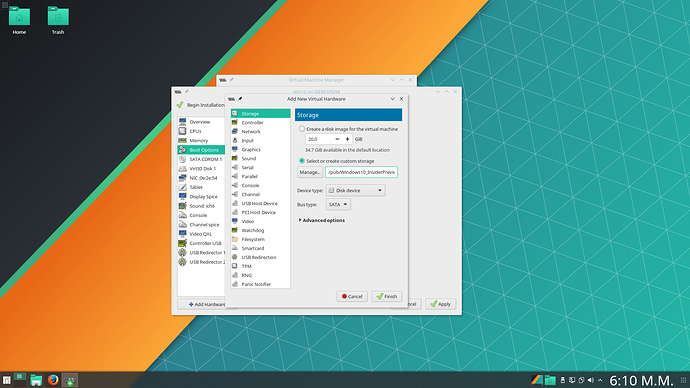 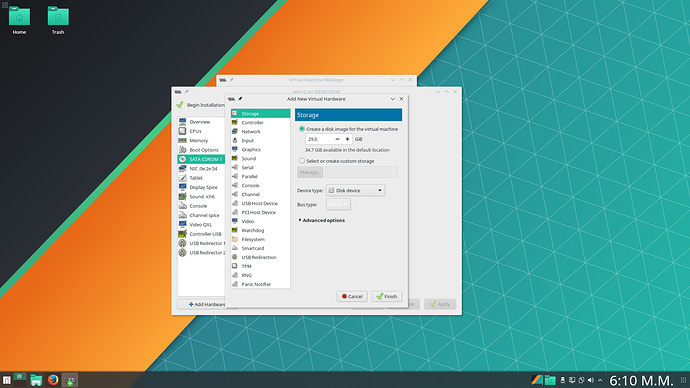 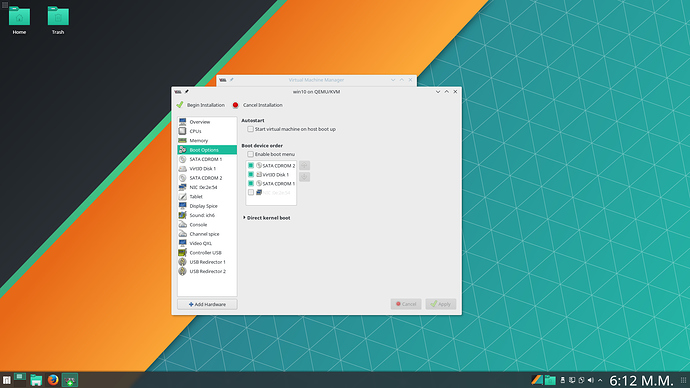 so what did I do?

This should be the easiest step but with a little snag. You’ll have to load the virtio drivers so at install time the installer can see the virtio driver we’ve set up. so you start the vm, and at some point you get here: 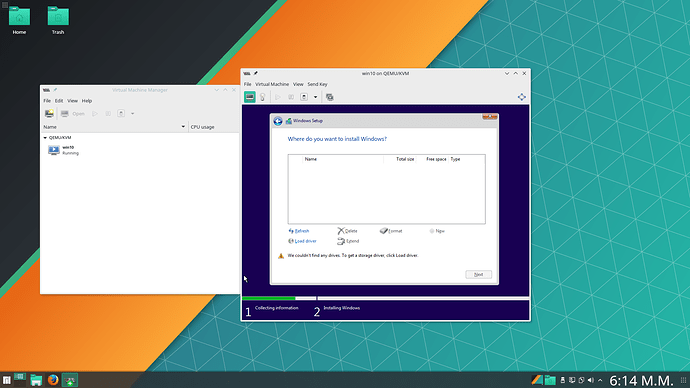 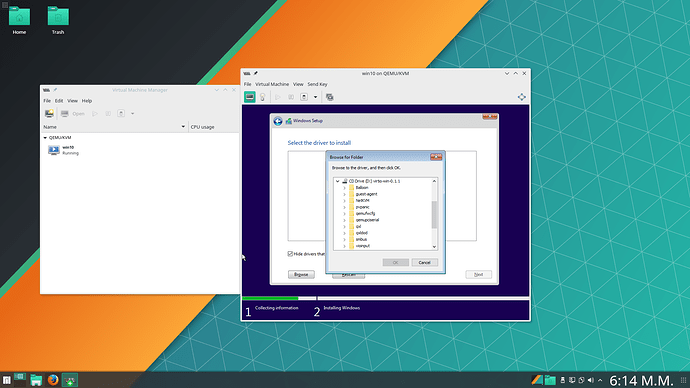 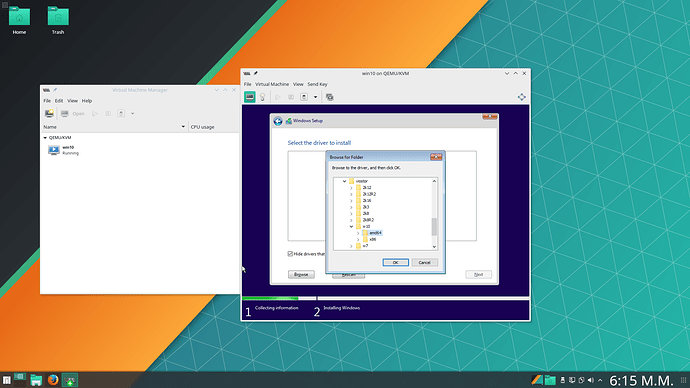 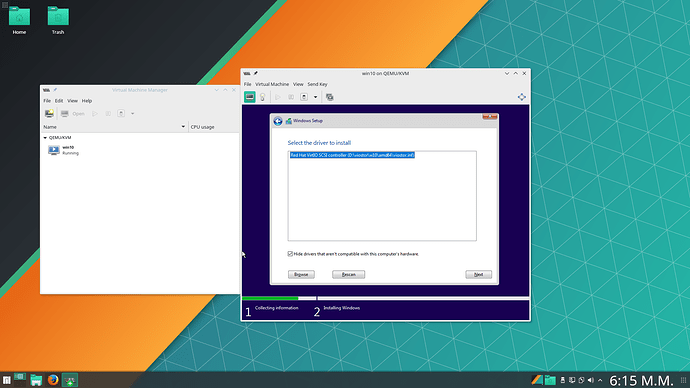 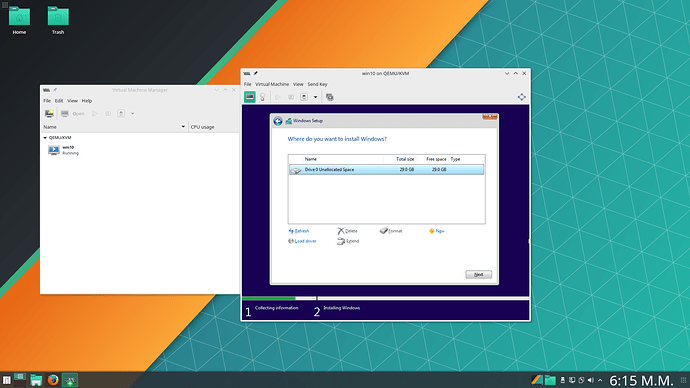 Let’s turn off the vm and go change some stuff so your gpu will start doing something. But first!! change your nic to virtio (you won’t have a network connection until you install the drivers for it though, I’l show you how to do that later) 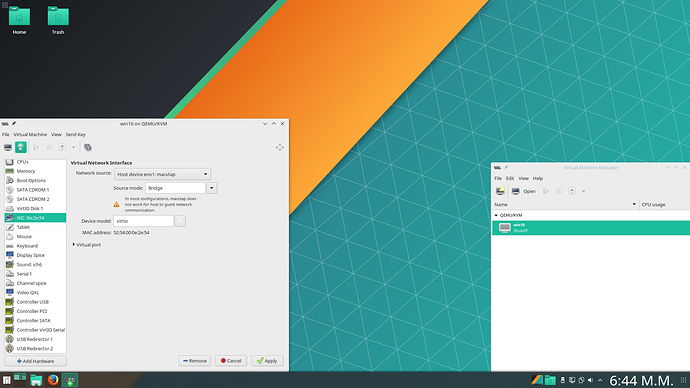 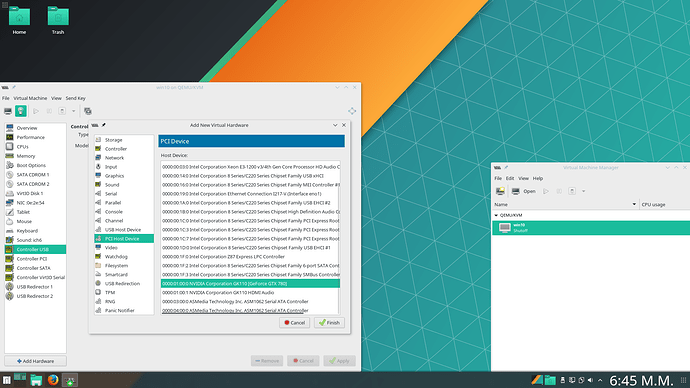 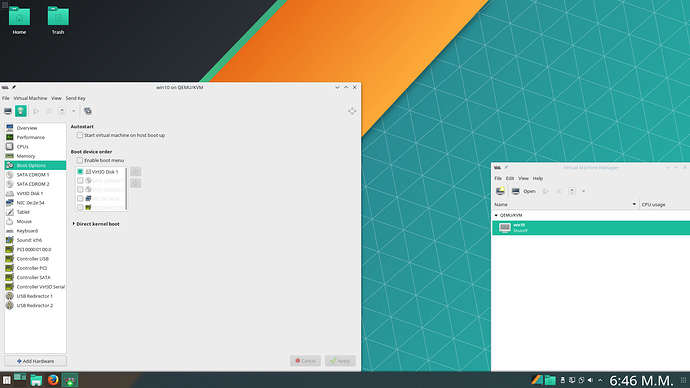 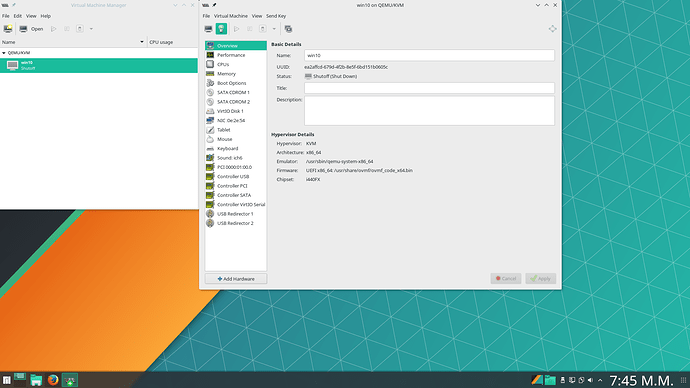 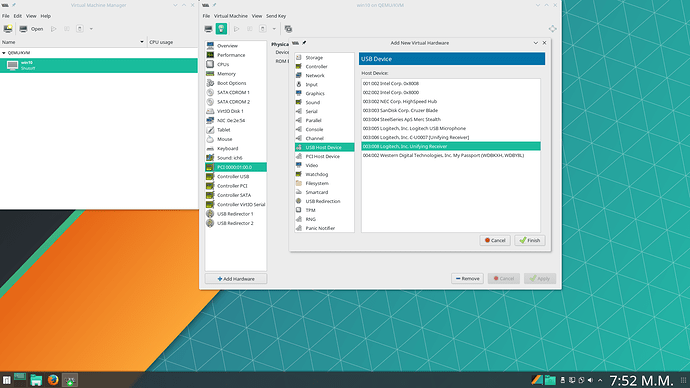 So now you should be in the vm and be getting output from your GPU however you have chosen to get that output (second monitor, other output on the same monitor or KVM switch). Next we go to device manager and see what is missing drivers. Click on each thing with the warning sign and then update driver, browse to the virtio disk and don’t select anything specific just click on the CD drive, it’ll find things on it’s own now that we’re booted. That’s what you will do to get your network working as well as anything else.

Obviously only applicable if you have an Nvidia GPU. What the deal is? Nvidia doesn’t want you to do what you can do with your hardware and needs to be slapped. So we will mask the fact that we’re in a virtual environment. If you named your vm win10 as I did you can just copy the command. Turn off the vm and then open a terminal. Type sudo EDITOR=nano virsh edit win10 which will open a big scary file. Now navigate to a segment of code that looks almost like the picture below and modify it to look as such: 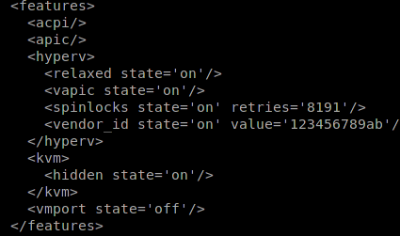 You’re now ready to turn your windows vm back on, download your graphics drivers and install them with no problems.

Very nice. I did some edits hope you don’t mind for syntax highlighting and such supported by markdown. Also moved to OSAlt->Linux subcategory.

Thanks for contributing and writing that little blurb.

Adding this on here so I won’t forget, but this seems relevant to this post as well.

Yaaaaaas. I needed this in my life!